My version of the scene right before Ensign Ro interrupted Riker and Troi in Season 5 Episode 14 Conundrum. 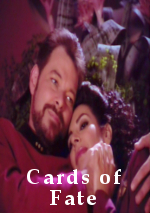 What if she hadn’t interrupted?

5 year old Laura Riker is excited for her first day of school.

Written for Weekly Free Write #127 "Your Worst Nightmare". A nightmare prompts Riker to be over protective of his daughter while on vacation to the Mayan Temple city of Tulum.

When Commander Riker and Deanna Troi’s daughter 2 year old daughter Kaitlyn comes down with a virus that was eradicated 10 years before, it’s up to Doctor Crusher to stop it from spreading ship-wide and infecting the crew.

Riker enjoys the little things in life while playing dress-up with his girl's Laura and Lily ages 5 and 7, and having a tea party.

Life seems ideal for Riker and his growing family, but when his daughter Laura is diagnosed with Epilepsy, things become a little strained.

Data...cooking?  Geordi's birthday inspires Data to create a special treat for his friend.

While picking flowers for her mother, 4 year old Laura Riker finds herself lost on a planet she’s never been to before. Can her parents find her in time?

Will and Deanna have a conversation about their growing family.

Laura Riker becomes a big sister, but isn't so sure she wants to share her daddy with her little sister.

Written for Day #2 of Prompt a day Challenge. 2 month old Laura is fascinated by the color red of her father Will Riker’s uniform.

In 2423, the galaxy is at a crossroads. The two dominating powers in the quadrants, the Federation and the Klingon Empire, are teetering on the edge of war for the first time in decades. A young lieutenant is assigned to a ship, an heiress to a family legacy of exemplary service in Starfleet. A spy mission goes as planned. But fate didn’t anticipate love … love that was never meant to be but came into existence anyway.

One man decided to rebel against what fate had granted him.

One man decided to love what he never had a right to.

One man will make a decision that will change the face of the quadrants.

A game of fates that no one may win.